Västmanland County is a county or län in central Sweden. It borders to the counties of Södermanland, Örebro, Gävleborg, Dalarna and Uppsala. The county also has a stretch of shoreline towards Mälaren. 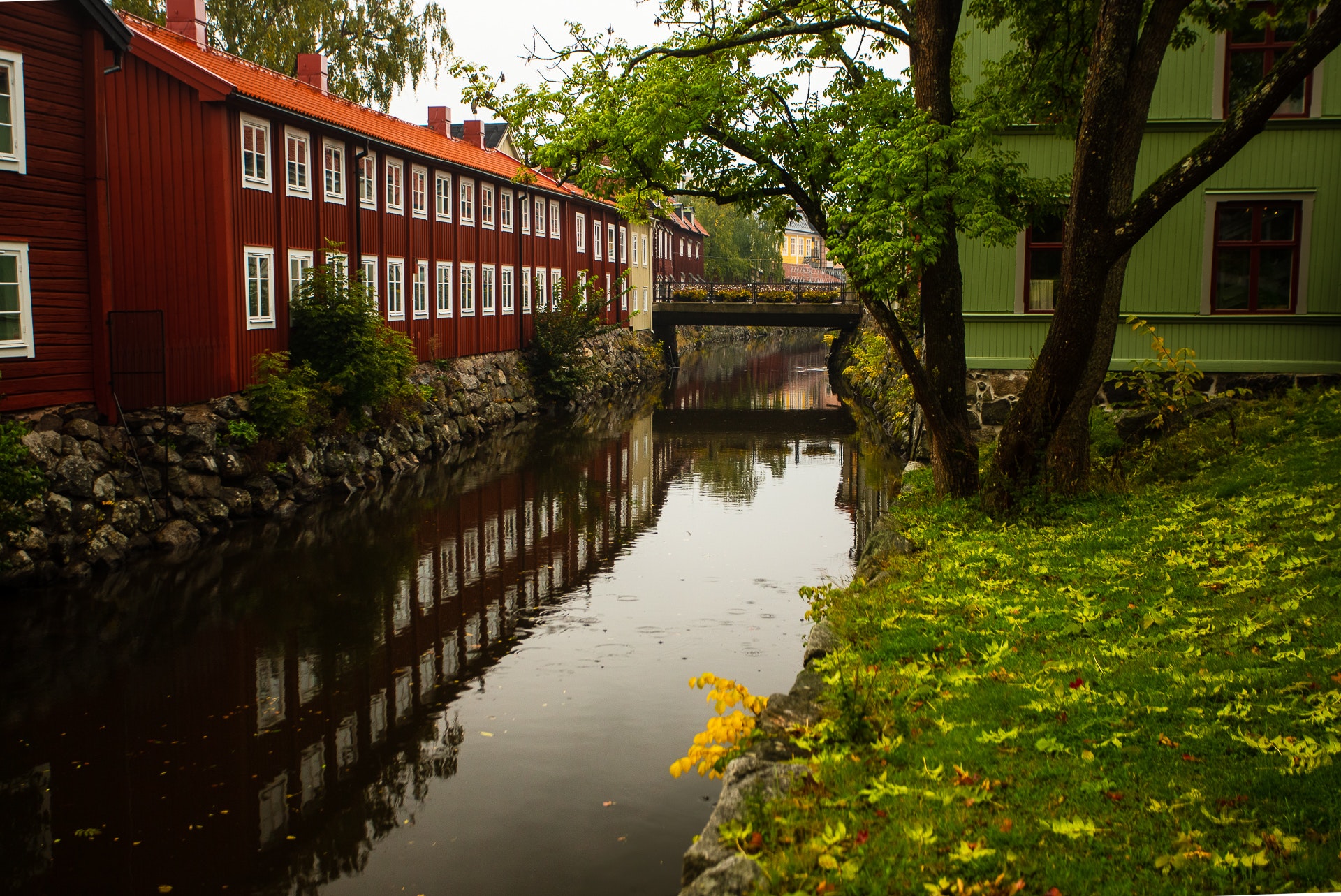 Vãsterås is Sweden's sixth largest city, sitting on the banks of a lake, filled with small islands Vãsterås comes alive during the summer months when boats and ferries run regularly out to the islands and water-sports are common. During the colder months, the town goes into hibernation. Many restaurants are closed on Sundays and the streets are empty during the morning.

Evenings the bars and restaurants fill up with vibrant outgoing partiers and the city comes alive.

Instantly recognisable, the Rådhus is a brutalist structure, looking almost constructed of lego, as its square base and tall square tower are visible through much of the city center.

Next door to the Rådhus, is the Stadshus, a far more traditionally Swedish government building.

On the west side of the river, just before Vasaparken, is Turbinhuset, the turbine house. A small museum showing the historic turbines.

Vãsterås Slott is another example of a manor house named a castle. Not a tourist spot, but a working building.

One of the most impressive buildings in the city, the Cathedral has a red stone exterior, and single tall spire. Its rounded rear is quite unusual.

Probably the main reason to head to Vãsterås as a tourist, Anundshög is somewhere between fifteen hundred and two thousand years old. The largest tumulus in Sweden, it rises high and visible in the landscape, not far from the main road, or the infrequent bus stop.

Surrounding the mount, two stone ships, each over fifty meters long are a dramatic and powerful sign of the areas history. The grey stones stand out strongly agains the lush green grass.

Stood between the road and the tumulus, a standing stone bearing the inscription

Additionally, the remains of a Thing-place can be seen.

The area is well served with information posts, in multiple languages explaining what it is you are seeing.

Towards the rear of the space is a cafe and visitor center, though check the opening hours as the stones can be seen at any time, but the cafe is open less frequently.

A ten minute walk from Anundshög, the Labyrinten is the only prehistoric maze still in existence in Västmansland. Originally made of 2-3000 stones, it is easy for visitors to be disappointed, expecting a large hedge maze, or something to walk through. Labyrinten is much smaller than you'd expect,

Dated to fifteen hundred years ago, it is unclear what the exact purpose of the maze would have been, but there are assumptions that a boy would walk the maze, avoiding the stones to free a girl as part of the spring rights.

The entrance faces the setting sun.

North of Anundshög, is the old Badelunda Church, a historic church, with parts that date from the 13th Century. Worth a visit, its about a twenty minute walk from any public transport, and so is easier to access or a bike or by car.

Karlsgatan 2 is actually two museums in one building, along with a small gift shop and cafe.

On the left hand side is the Vastmanlands Lans Museum, giving a cultural history of the county, from prehistory to present day. It features a number of child friendly activities.

The right hand side features the Vãsterås Konst Museum, a reasonably sized space, featuring a 100 year history of the local art scene.

Both museums are free, though neither will take too long to explore.

A small exhibition space, it was featuring the work of XXXX, an artist with a background in theoretical philosophy, which shows in his work. Sculptures, which then feature in his photography. Abstracts made of the platinum in CDs from ten years of his backups. A tower of letters casting shadows on the wall.

Well worth a visit when you are nearby.

Scandinavia loves outdoor museums of their historic buildings, but the Vallby our-door museum is perhaps one of the finest. Unlike many of the other examples who refrain from monetising their museum. Vallby has working local stores, vegetables sales, animals like the Våmt goat and even a cafe and local good store.

The historic buildings are in good condition, and the layout feels very realistic. The animals add a nice touch to the authenticity.

A circular park space, on one of the peninsulas of the harbour, the views out to the lake are lovely, particularly in good weather.

Set behind the town-hall, this small park give a pleasant green space to the south of the city.

A tiny botanical garden, next to the Cathedral and the Library, a series of flower beds provides various flora space to grow.

Running along the river Svartån from the Turbinhuset is a special fauna passage for fish to easily travel up the river, and increase the diversity of lake Mälaren's fish population.

Based in the harbour, Agrill is one of the best places to eat in Vãsterås, specialising in steak, they also do a range of other options. The interior space is huge, and has a large outdoor space for warmer months.

Bra Hak burgers is rated as the third best place to eat in Vãsterås. Set in an old factory on the banks of the river, the burgers are excellent, and varied. A series of sides are temping additions and all their burgers come as vegan options. A sizeable drinks menu rounds off the offerings.

Well worth a visit.

Set in the grounds of the outdoor museum, this large cafe offers great fika options as well as a selection of home cooked meals.

Running through the summer months, they are closed during the autumn and winter.