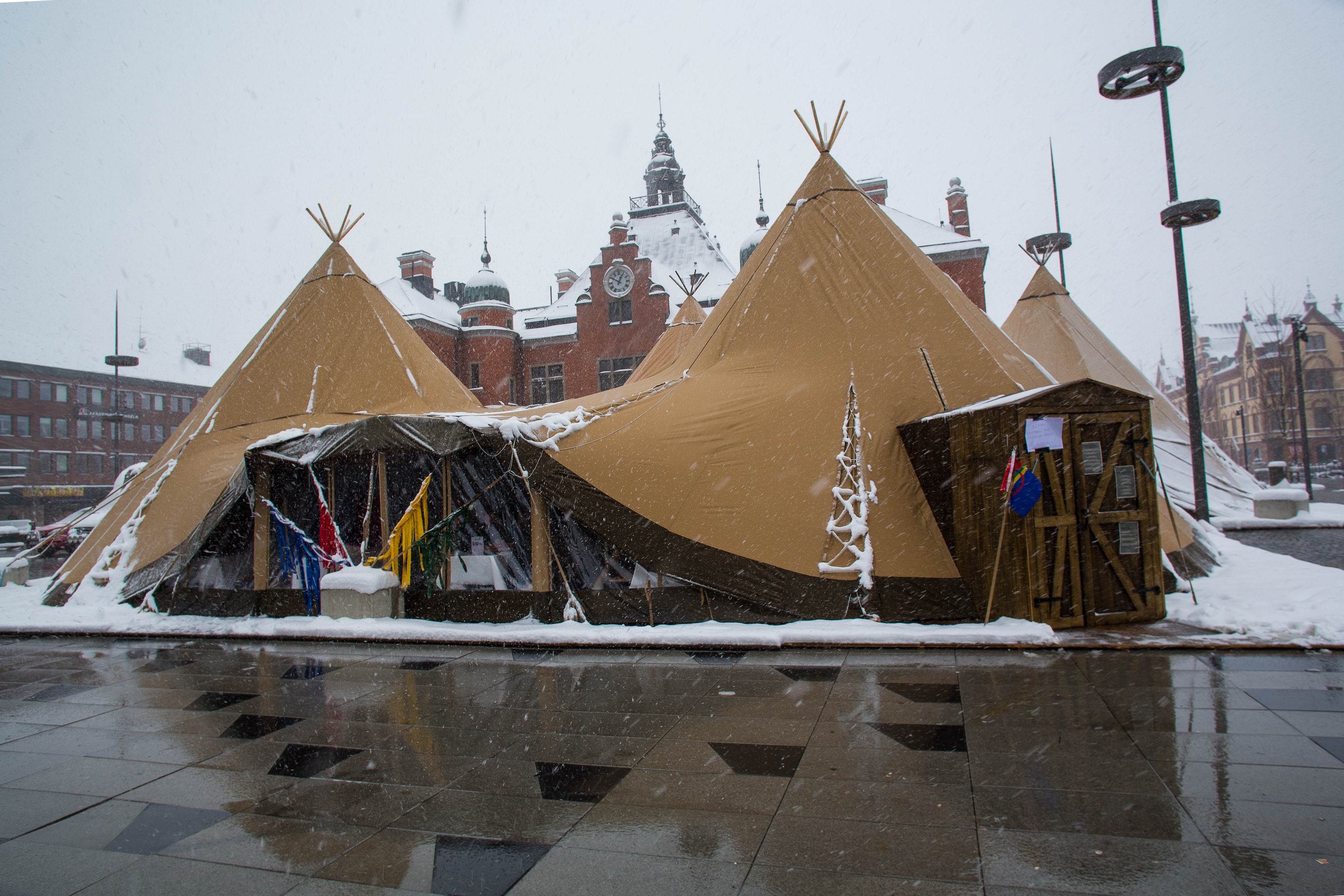 Västerbotten, also known in English as West Bothnia or Westrobothnia, is a province (landskap) in the north of Sweden, bordering Ångermanland, Lapland, North Bothnia, and the Gulf of Bothnia. It is known for the cheese named after the province. 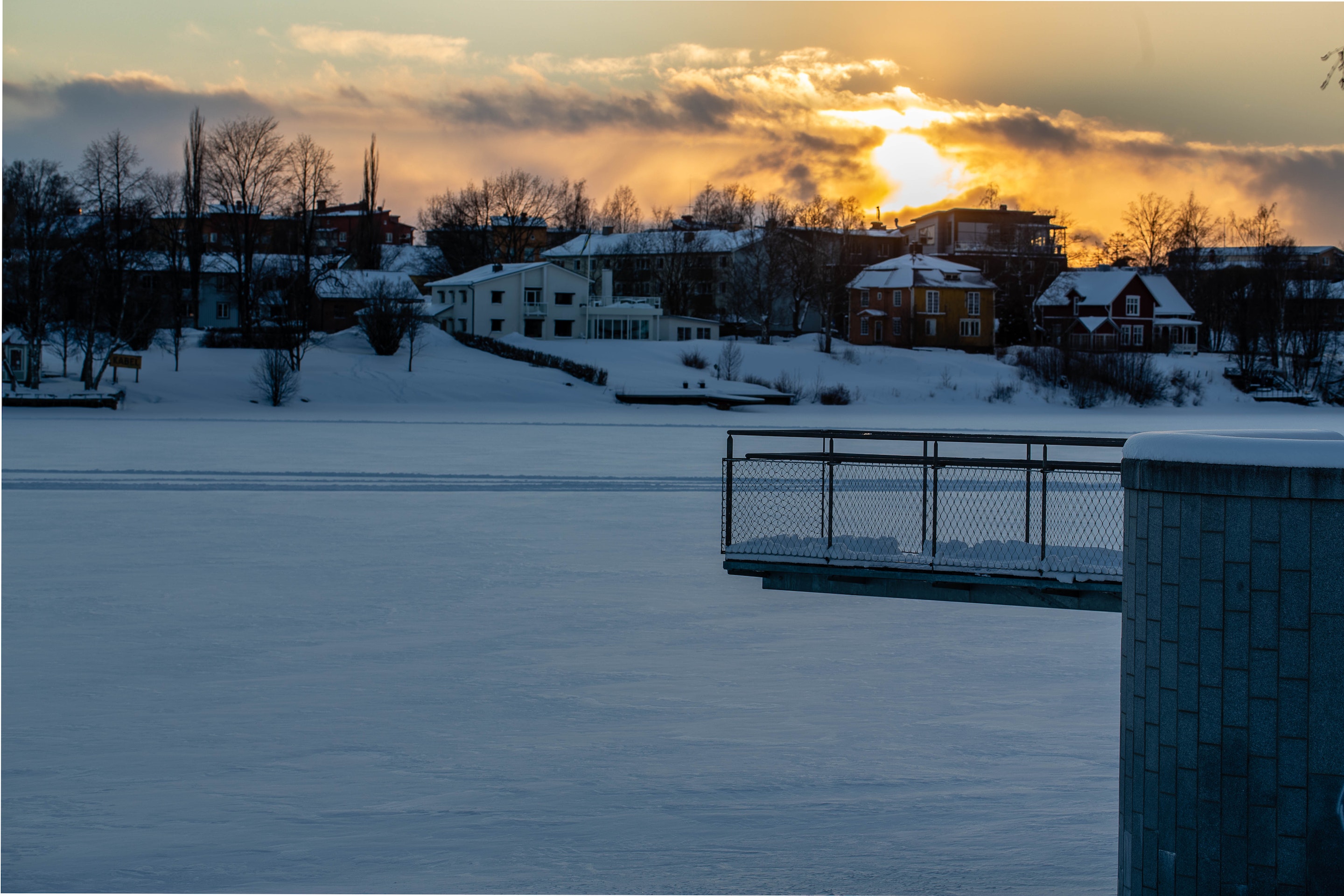 One of the reasons I chose to come to Umeå during the winter is that every year, in early march they run Saami Week. I had expected something showy, touristy and perhaps artificial. What I found is exactly what I should have known. In my first year in Sweden, I went along to part of the weeklong Pride Festival in Gothenburg and was surprised. The pageantry was minimal, instead it was made up of workshops, stalls and information.

Saami week was the same, whilst there was a yurt in the centre of town, which had music and information, most of the events were run by the museum, the cultural centre and the Opera. Sweden takes the things that are important to it seriously, and that means giving people a legitimate chance to experience them and learn. Fun is part of it, but so is respect. England has an embarrassed acknowledgement of our fold traditions, often regarded as silly, there is little chance we’d host an up market event at the Opera House for Morris Dancing.

This is not a tourist occasion to show off the Saami, it is a chance for people who are interested and for the Saami themselves to share their culture, art and lifestyles.

Umeå is a university town. As such, it has a good number of decent bars and restaurants for its size. Over all its a small town of about 120,000 people. Most of the shops can be found within a few blocks of each other, but there are several large shopping malls in that space, no doubt because of the heavy snow that falls for half of the year making indoor shopping a preference.

Unlike some cities, Umeå has a number of older Scandinavian buildings in its city centre with plenty of space around them, it gives the city a quainter feel than it perhaps deserves, but also gives it more character. Thats not to say its not modernising, the new civic centre on the river and the university buildings are all modern impressive architecture. Umeå’s found a good balance here.

Towards the South-East end of the city center is the City Church. The spire visible from much of the city. Whilst nothing compared to the Churches of Stockholm, or even Gothenburg, it is still a strong visual symbol, facing a small park.

Near to central station there is the Opera house, with a major auditorium for larger events, and the Black Box, a small, intimate venue for other opportunities. It was hosting Jubileumskonsert, as part of Saami week, an orchestra and some Saami musicians putting on a Joik.

I know little and less of describing music, but none the less I will try. The sound of the Joik thunders through you. It is the sounds of deep woods and dark tall stone. It is music made when in a cold valley with a high fire. The womens’ voices are sharp and clear as glass and they soar up to a moonless night. The sounds are traditional and modern blended together in the orchestra. The singers make words that are the sounds like the wind, the wolf, a guttering fire.

One thing you can see is there is such joy in their singing. There are smiles and the movement of happiness from the performers, in a way that you rarely see.

The Sami cultural centre is open all year round as a cafe, art centre and cultural touch point. A Yurt is outside to see and use, though it is rarely sat in in winter, and inside you can get food, drinks and crafts.

Out by the Västerbotten Musuem is the small, wooden Helena Elisabeth Church, over two hundred years old, and only with heating for the last fifty it is a pleasant sight on the way to the musuem.

In the centre of town, on the city square was the Sami Yurt, featuring music, food, drinks and information sessions throughout the week. Like much of the Sami week this was focused on giving the Sami a voice and a venue rather than spectacle and tourism. The venue was open and licensed surprisingly late, still serving beers at 1am when many other bars had already closed.

To the north of the city centre, next to the Saami cultural centre, and easily reachable by bus is the Västerbotten Museum, giving information on a range of subjects. Divided up into approximately seven halls, the Museum covers famous local photographers, military history, ancient rock carvings and even a museum of skis, holding the oldest pair of skis in the world.

The small women’s’ history museum is set in the library in the new civic building, shared with a hotel. Consisting of only two rooms, one of which was being refurbished the Kvinnohistoriskt museum tells the story of European women through examples, and offers a wall  for visiting women to weave into a narrative of word they feel define them.

The jewel in the crown of Umeå’s museums, the newly built Bildmuseet is part of the famous museum. Set over six floors with high profile exhibitions, the museum is well worth a visit. The top two floors were an exhibit created in partnership with CERN about space.

Further down, an African mosaic, and a sound driven experience with a mechanical ‘heart’ in the centre and projections all around exploring the passage of time. The first floor was a creative space, where people could paint their own mural inspired by the professional one above.

The basement is the cafe and event space, and during my visit was home to the Saami quiz and lecture and spoken word poetry.

Expansive, well curated and original, the Bildmuseet is worth visiting.

This was closed for refurbishment during my visit, but is generally referenced as a key attraction to visit in Umeå, and well worth attending.

A small park with private buildings near to the university.

About twenty minutes by public transport out side of the city is the Skulptureparken. A number of sculptures scattered  around the grounds of an office park. Snow covered ground can hide a number of them, so it is better viewed during the spring and summer months.

On top of a chimney stack, a lone horse watches everything.

Set in the city hall, Rex has a relaxed upmarket vibe. The Sunday brunch was excellent. Three courses, with smoothie and juice shot included. It was a huge pile of food, but good value, with great service.

Out of the city centre, Zillers is set in one of the old gaol buildings, and run by an energetic Austrian. Service is very fast, and the food is wonderful. Heavy Germanic dishes. The decor is rustic, alpine and a nice change of pace from Swedish minimalism.

Underneath Rex, is the cellar bar. With a wide range of beers on tap, it is a big space, with lots of alcoves. A favourite of the more mature students, its a good place for a strong beer.

Opposite central station, along the crescent with other restaurants and shops is Köksbaren. Upmarket and pricey, they have a long communal table, as well as private ones. I had the reindeer carpaccio followed by 60 day dry aged steak. The meal was fantastic, the decor is pale woods and vaguely nautical.