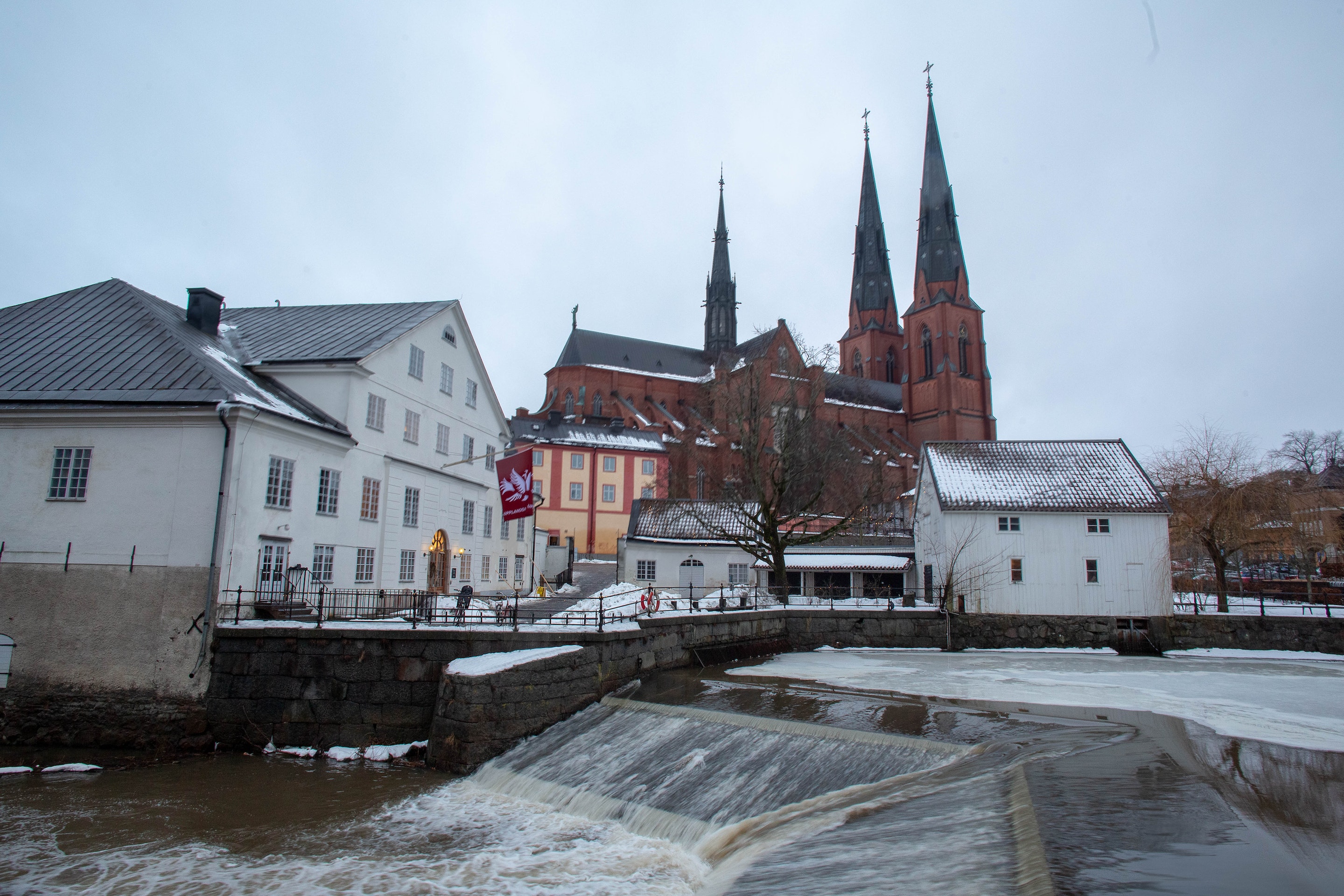 Uppsala County (Swedish: Uppsala län) is a county or län on the eastern coast of Sweden, whose capital is the city of Uppsala. It borders the counties of Dalarna, Stockholm, Södermanland, Västmanland, Gävleborg, and the Baltic Sea. Old Uppsala is a trove of Viking history, featuring a museum, and a series of long walks to see the Thing, old churches and other history. A short bus ride from Uppsala itself, it is a vital thing to visit.

Old Uppsala is a series of viking burial mounds from 3rd century AD onward along with a museum, church and other sites for visitors. It was a home to ancient Swedish kings of the Yngling dynasty.

The mounds are the site of the Thing of all Swedes, and whilst it has a less dramatic presence than the location of the Icelandic Thing, it is a prominent historic location. the mounds themselves are easy to mistake for hills without guidance, but they stand unusually tall in the midst of flat fields.

An ancient church, built in the 12th Century, and likely on the bones of the heath church from generations before that, it is set on a slight rise, overlooked on two sides by the Viking mounds. Wonderfully old, the church is worth a visit when in Old Uppsala.

Set by the public entrance to the Thing, the Museum is set over two floors and has a wide variety of activities, particularly during the warmer months. It is not a particularly large museum, but it is heavily focused on the findings from the local area and outlining how the Vikings lived their lives.

Uppsala is a fair sized, fairly generic Swedish town, down the center a canal runs, dividing the city quite neatly and making picturesque what could have been quite generic a city.

Uppsala Cathedral is a large Gothic church near the centre of town on the Fyris river that runs through Uppsala. In constant use for over seven centuries it is a key part of the landscape of Uppsala. It is the only church in Sweden that fulfills all three levels for its faithful. It is a parish church, a church of the diocese and the church of the Swedish Church.

The church is an impressive building, though now somewhat tucked away form the main bustle of the town.

Near to the castle, stands the Obelisk, a two hundred hear old pillar dedicated to Gustav II Adolf.

Like most castles called ‘slott’, Uppsala Castle is closer to a large manor house than it is to a medieval castle. Originally started in the 16th century as a fortification it was reconstructed two hundred years later and again in the early 21st century when the facades of the castle were renovated giving it the more modern look.

Aside from being the home of the Art Museum, it is also the residence of the Governor, and there is a summertime museum called the vasaborgen in the castle ruins. Additionally, the Peace Museum is also based here.
As much of it is in use, there is little to see directly as a tourist, but by visiting the museums you have the chance to see much of it.

The Gunilla watch is the site of the bell, a symbol of Uppsalla. Originally cast in 1588, the bell is key to a number of local traditions and ceremonies such as a December torchlight walk from the Norrlands Nation to the bell where it is rung at 9pm.

Right on the river, the Uppland Museum gives a history of Uppsala County as well as a venue for artists. There are permanent exhibitions showing the history of the county for over five thousand years including a small treasure room of artefacts as well as space for temporary exhibits. During my visit this was focused on allowing a series of artists to show what they could do with seven kilograms of Iron.

The Uppsala art museum is housed in the castle, and set over three floors. It has paintings from the university collection as well as temporary exhibitions. There is no entrance fee and there is a lovely cafe in the castle basement.

There is also a section dedicated to work from the abandoned ceramics factory Upsala-Ekeby, which is worth visiting the museum for on their own.

Part of the historic area of Gamla Uppsala is the Disagården, an outdoor museum of life in Uppsala. Featuring buildings from history, it is a popular approach in Scandinavia with similar museums in Halland and Oslo. During the summer months, when fully open traditionally dressed people populate these museums to educate the visitors. In the winter, it is only the closed up buildings.

Along the river, the city park is a popular outdoors space. Starting next to the Pump Musuem, it is a long, thin park with benches, green spaces and walking tracks.

A Swedish take on English pubs, the Churchill arms has a range of beers on tap, a dark wood interior and is often quite crowded due to its well deserved popularity.

Near to one of the bridges over the river, The Terrace Kitchen & Bar does good food and has an excellent wine list.