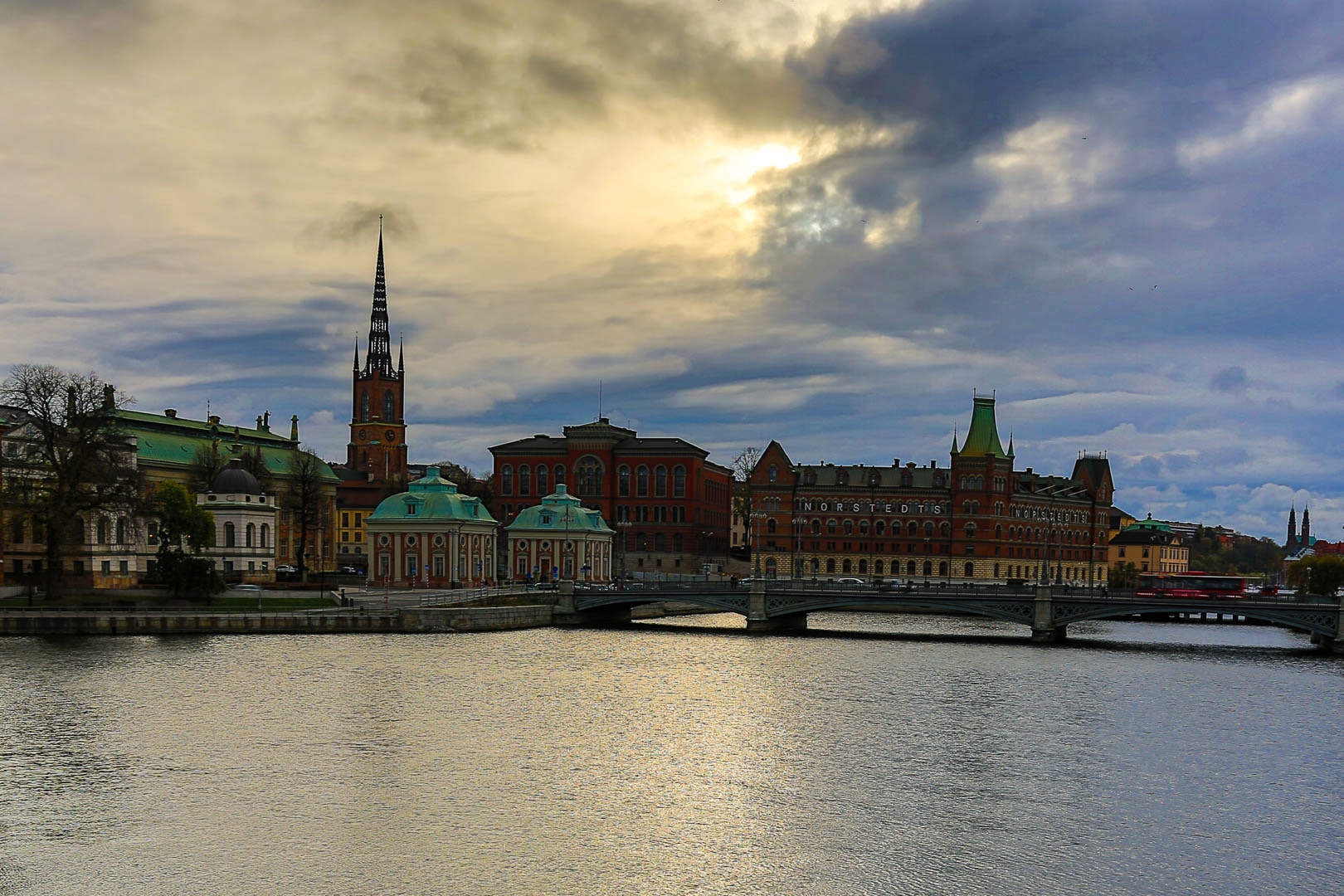 Stockholm is a city on the water, looking into the Baltic, passed its many islands, the city itself forms a crosshatch pattern of islands connected by bridges over the inlets and rivers. In the winter many of
these rivers freeze, and its common to see the locals skating across them.

The temperature was bitingly cold, reinforcing why in England when it is cold we say 'it's absolutely baltic' and the fingerless wool gloves I use for photography in the cold were not up to the task, reminding me that this time last year, in Oslo I was wearing thin running gloves below they to keep out the wind and chill.

Having bought a new jacket the night before on an impulse, I then bought gloves to match and to keep frostbite from my fingers. With my plan of Seeing Sweden including Umeå in March and Abisko in December, wool lined leather gloves seemed a sensible investment.

Like many Scandinavian countries, Stockholm is a mixture of old and new architecture, and church spires are common sights on the landscape. Combined with the modern glass buildings and the low winter sun reflecting from the ice its a striking, if sometimes bleak city.

The Stockholm National Museum is situated at the point where one island ends and the bridge to the next would take you to the Modern Art Museum. The building itself is old and imposing, the ground floor is primarily the restaurant and shop, with a small courtyard of statues.

The second and third floors have the collections, both permanent (working from the 16th century towards) and the temporary, at the time of writing focused on modern designers. The collection is good, but visiting, I am reminded of something I learned during my 12 Cities in 12 Months tour, that I find most historic art museums to be too similar in style, layout and content to be truly immersive. Grouped by year and style, almost always the rooms have a colour theme to the walls and you are confronted by the rampant similarity between artists, once a genius creates a style, the imitators follow.

If you are looking to see a collection of historic pieces, carefully curated and organised, this is a fine place to spend an afternoon, if you are looking for art with more innovation, the Modern Art museum is a short walk over to the next island, further out from the centre of things.

The Fotografiska Museum is on the banks of one of the many rivers that divides Stockholm. A long building, likely a warehouse in the past, of dark brick with a bronze fruit outside. The exhibits are over two floors with the top floor being a bar, and the museum, unlike many, stays open until 1am, primarily supported by the restaurant and bar.

For a more detailed look at the exhibits I saw, read: Fotografiska Museum

The Technology Museum is east out of the city, a long with a number of other museums in a park area. The space is split over a few floors, with the ground floor being dedicated to a temporary exhibition of the hundred most important inventions (as voted by the Swedish Population) Its an interesting concept, and the list is provided, highlighting the differences in voting between adults and children.

The second floor has a much more interactive focus, build around video games, with playable examples throughout. Above that there is a floor of mechanical discoveries and illustrations of some of the principals of mechanical engineering.

I spent the weekend with some friends in Stockholm, and we spent a lazy autumn Sunday at Millesgården. A sculpture park created by architect and sculptor Carl Milles in the grounds of his home in Stockholm, the statues are primarily set on tall columns to frame them against the sky and the sun and aside from a brief hail storm, we had lovely golden light all day to explore in and take in the display. The trees were autumnal and a great contrast to the bronze statues and the grounds are sizeable, overlooking Stockholm across the water.

The cafe in Millesgården offers a chaotic serving environment more than made up for by the quality of the food. The pastries are fantastic and we all had food envy for the choices of others for the main courses.