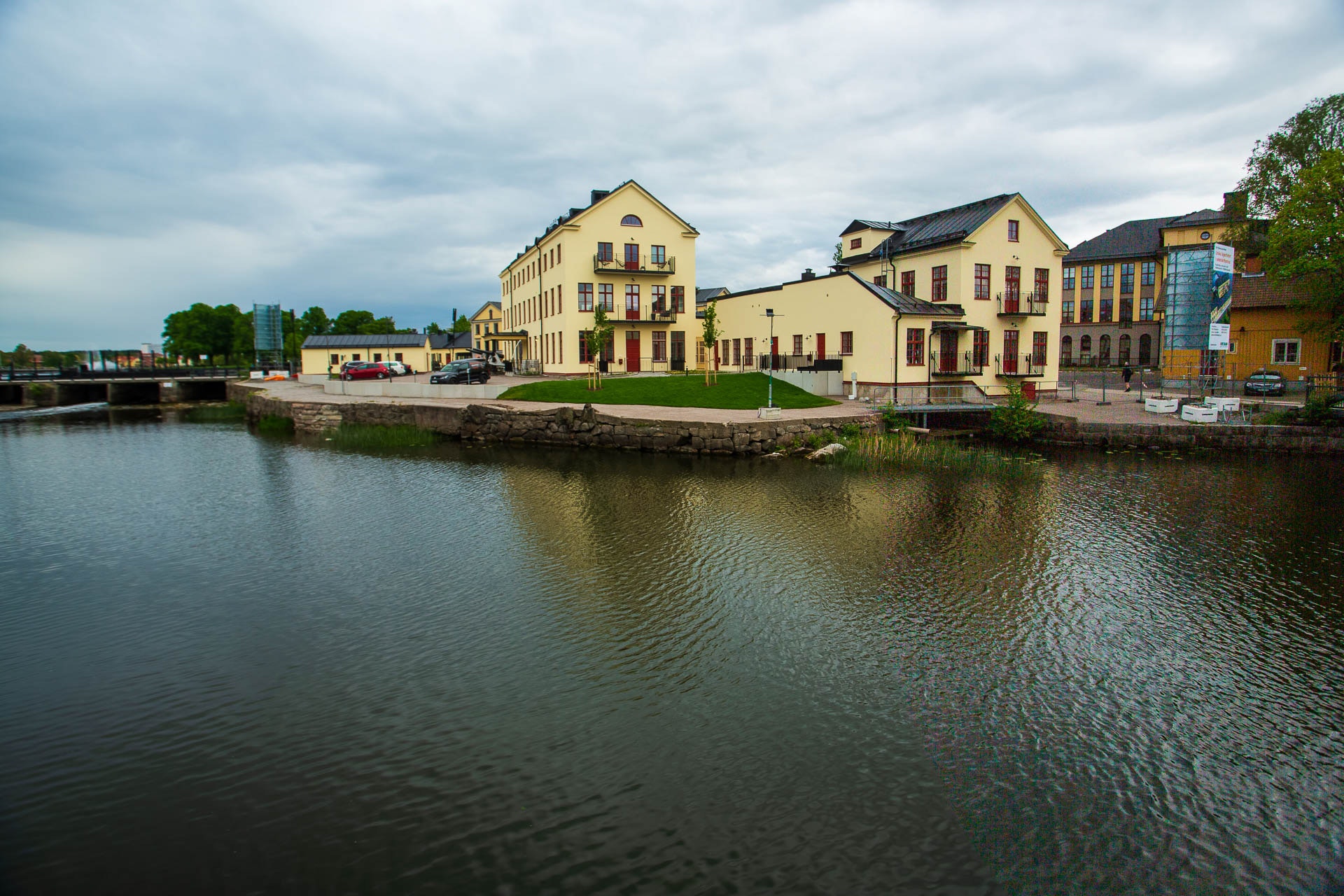 Södermanland County is a county or län on the southeast coast of Sweden. It is often shortened and pronounced as Sörmlands län, or simply Sörmland, which is the dominant pronunciation locally. 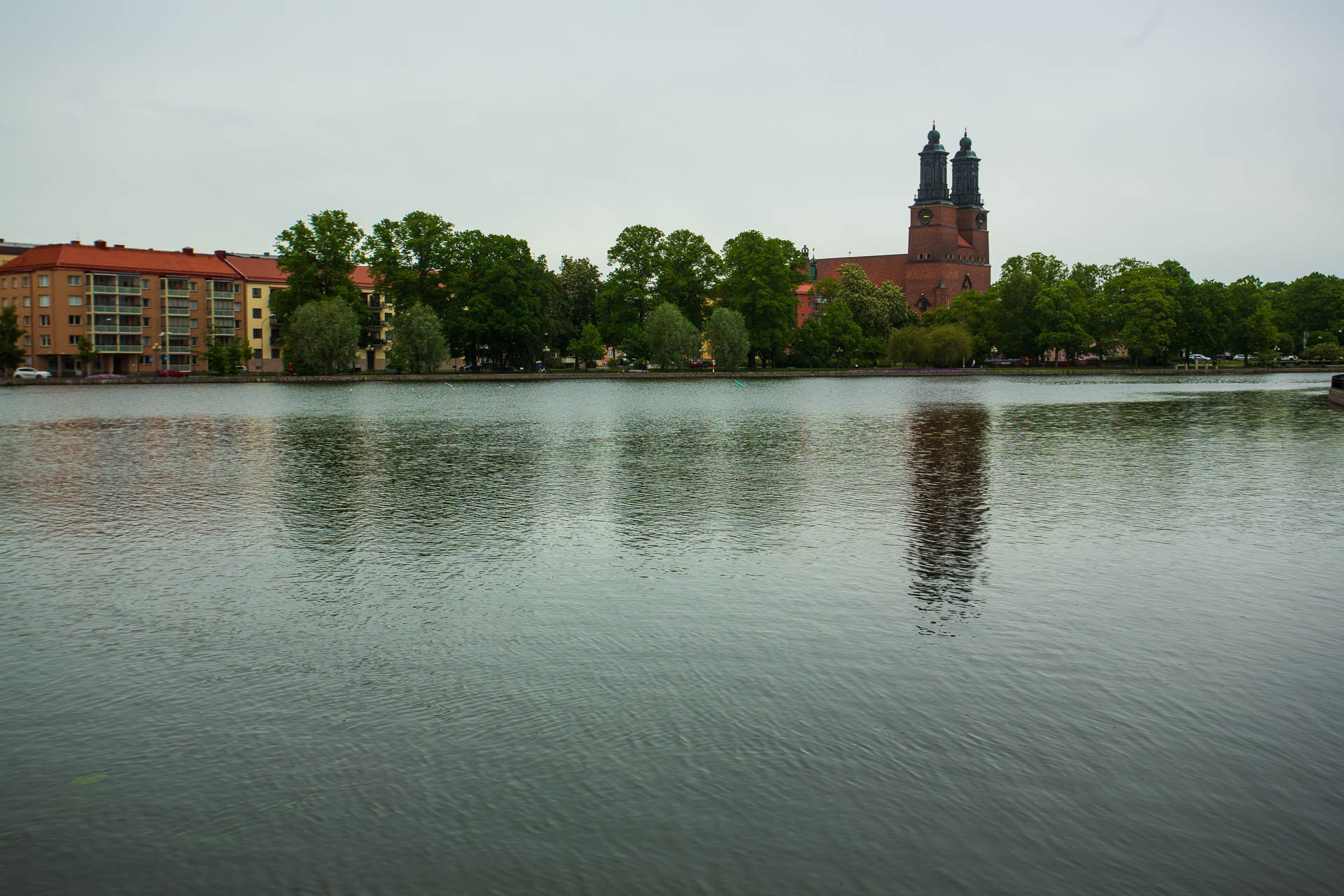 There is iron everywhere in Eskilstuna. In the soul of the city. Full of swords and steel. Nicknamed Stålstaden, there are traces of the dying smelting and manufacturing everywhere. The city guideposts for tourists are constructed of curved steel, the curbs in the Munktel factory area are all metal beams riveted to the street. Everywhere you look, there are subtle and not so subtle signs of the cities pride in its smelting history.

Just after one of the main bridges in the centre of town is the imposing brick church, like Växjo, it has a peculiar double spired front. It's easily visible from many spots around the town.

Constructed in 1929, it lacks the history of modern elegance of some churches and so sits uncomfortably in the middle, not quite reaching the style of Art Deco.

The central square in Eskilstuna has a large droplet statue and small pond in the centre, a few scattered stalls selling local produce and the large imposing council building at the south end of the square. It's a place for people to gather, have a coffee or chat, and there are signs of more and more cafes opening around the square, something uncommon but desperately needed in Sweden.

Sweden loves its outdoor museums, and this is one of the better ones. A preserved section of the old craftsmen's district, buildings for blacksmiths and other artisans and their wives and servants, are preserved and still used. A small cafe, ironworkers and jewellery shop, and an art gallery made good use of the space. Next to every building, there is a board explaining the history and usage of the building and any interesting information about the residents that have been recorded.

For certain days of the year, primarily in the summer, re-enactors make the streets come alive with history and retell stories.

It won't take long to explore the outdoor museum, but it is worth the visit.

On a small island, connected by bridges to either side of Eskilstuna, is the City Museum, set in an old factory. The City Museum is focused, as is not surprising in an industrial town, on the industry, machines and tools they built. The ground floor is full of mechanisms and machines.

A floor up, there are examples of weapons, from swords to missile launchers, that have been created in the city. There is an ambivalence shown to the modern arms industry, recognition of the importance to the cities prosperity perhaps but a conscious awareness of the human cost of weaponry—each one displayed in a scene showing the damage it can do.

There are a series of locomotives in the backroom, in competition perhaps with the Munktell technology museum across the river.

Taking up a single warehouse in what was, in the past, the Munktell district is the Munktell Technology Museum. A high ceilinged building filled with machines crated by Munktell and then by Volvo BM after the merger. Still a major employer in the area, it is the Volvo logo now that is internationally known rather than Munktell.

There is also a ten-minute film, put on by request, showcasing the history of Munktell. Worth watching.

Strangely, scattered throughout the museum are a series of antique and well-preserved items of furniture.

Also, in the Munktell industrial park, the Art Museum has a permanent and a temporary collection.

Some of the first exhibits you on entering the museum are mechanical devices creating art through movement—a strongly appropriate choice.

The building reminded me strongly of Mjellby Art Museum just outside of Halmstad.

They explicitly ask that you do not take complete photos of the artwork, only partial images, and don't post to social media.

Loosely the shape of an apostrophe, the city park is directly in front of the Klosters kyrka. It is a good-sized space, with various events that happen in its borders. It runs for some of the lengths of the river, giving nice views over the main town and cooler breezes.

A tapas place, festooned with British football banners, is split across two venues, on either side of the pedestrian street. The food is good and plentiful, and the staff are friendly.

A huge space, both indoors and out, feels like Grappa could happily feed the population of Eskilstuna. It offers a good selection of Italian food at reasonable prices.

The Sigurd Stone is a short walk away from a bus stop about twenty minutes outside of Eskilstuna in the hamlet of Mora. In true Swedish style, this ancient stone carving is freely available to anyone to visit. It is unprotected, and nothing but decency stops people from defacing it.

The stone tells the story of Sigurd Serpentslayer through carvings and runes. A protective coating is visible over the carving to keep the red paint fresh and clear.

It is a remarkable piece of history, over a thousand years but still clear on the rocks, showing Sigurd's Saga.

Tuna is a tiny place outside of Eskilstuna (which was itself originally called just Tuna) and is a retail park, the Zoo and amusement park and an ancient castle. Tuna itself has a population of under three hundred people.

A large retail park about fifteen minutes outside of Eskilstuna by bus is a typical retail park with an indoor shopping mall and larger outdoor shops. You'll likely be able to find anything you need there, as long as it comes from a chain store.

A stop or two before Tuna Park on the way out of Eskilstuna is the Parken Zoo and amusement park. A good-sized zoo, reminiscent of the Alpen Zoo in Austria. The animals have good-sized enclosures, an advantage to a zoo further out from the main cities in a country as spacious as Sweden.

I managed to catch the feeding of some of the monkeys on their island.

I was also just in time for the Lions' feeding, though visibility was poor as the glass was streaked with mud from their playing in the past.

Directly behind the Tuna Park shopping centre's car park, in the forest, stands the remains of the Stenby Fornborg. A castle ruins over 1500 years old, it is found by following a game trail from a subtle signpost.

If you didn't know it was there, you would never think to look, and even if you saw it, it would take an expert to be able to distinguish the pile of rocks as something artificial. Imagining the forest cleared and the stones secured, you can understand the commanding position the fort would have held in the area.

It is a strange thing to visit, akin to the Sigurd stone, in that it is a piece of ancient history, fascinating in its way and completely abandoned, left to the curious to find.

I stopped in Katrineholms for a few hours in between connections to Gothenburg. I'd originally planned to only have thirty minutes there, but once I'd finished at the Parken Zoo in Eskilstuna, there wasn't much keeping me there, so I thought I'd see a bit more of Katrineholms.

It's a stop on the Gothenburg to Stockholm fast train, so I'd been assuming it would be a fairly large and busy place. Thirty years ago, it was a fairly major industrial town, with Eriksson and Scania having a dramatically reduced presence.

Owing to these two things, it has become something of a commuter location to Stockholm for people looking for a quieter place to live. At barely an hour outside Stockholm, it has not felt the need to grow its own shopping or dining culture, and so there are only the basics. The local tourist bureau recommends on its main page the chain pub O'Leary's as a venue for dining in the town.

There are still some sights to see and scattered through the town; red posts with historical information can be found in key locations.

Near to the City Park is a small but nice looking Church.

The city park is surprisingly large and has an open-air theatre at the far end, beds of flowers and surrounds a civic building. It is a very nice spot on a sunny day.

Somewhat isolated, north of the train station, is the larger Church, with a traditional Swedish style.