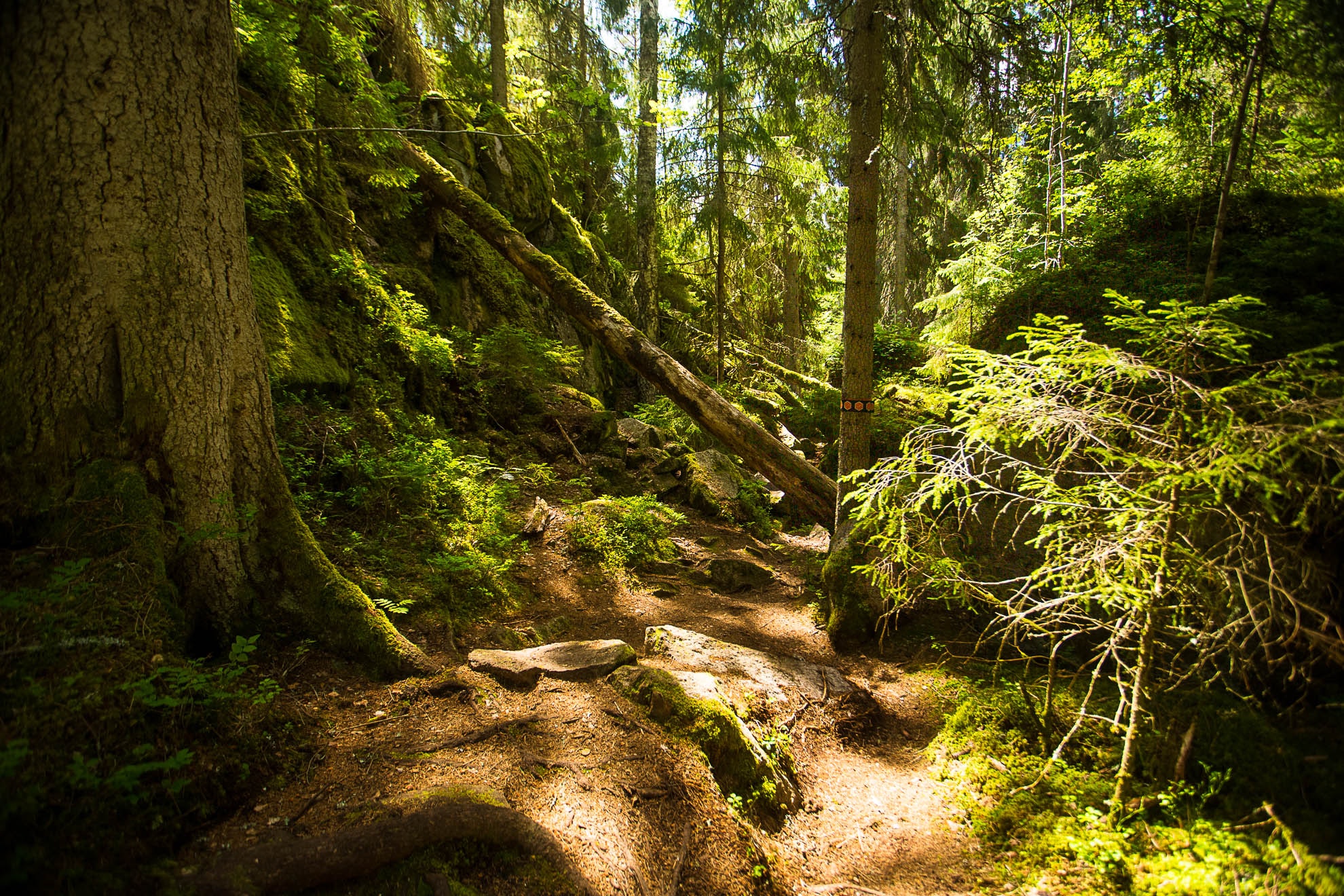 Örebro County is a county or län in central Sweden. It borders the counties of Västra Götaland, Värmland, Dalarna, Västmanland, Södermanland and Östergötland. It is frequently culturally divided into the hilly northern region of Bergslagen, where mining and metallurgic industry have been important since the Middle Ages, and the southern Mälardalen of lakes and farms 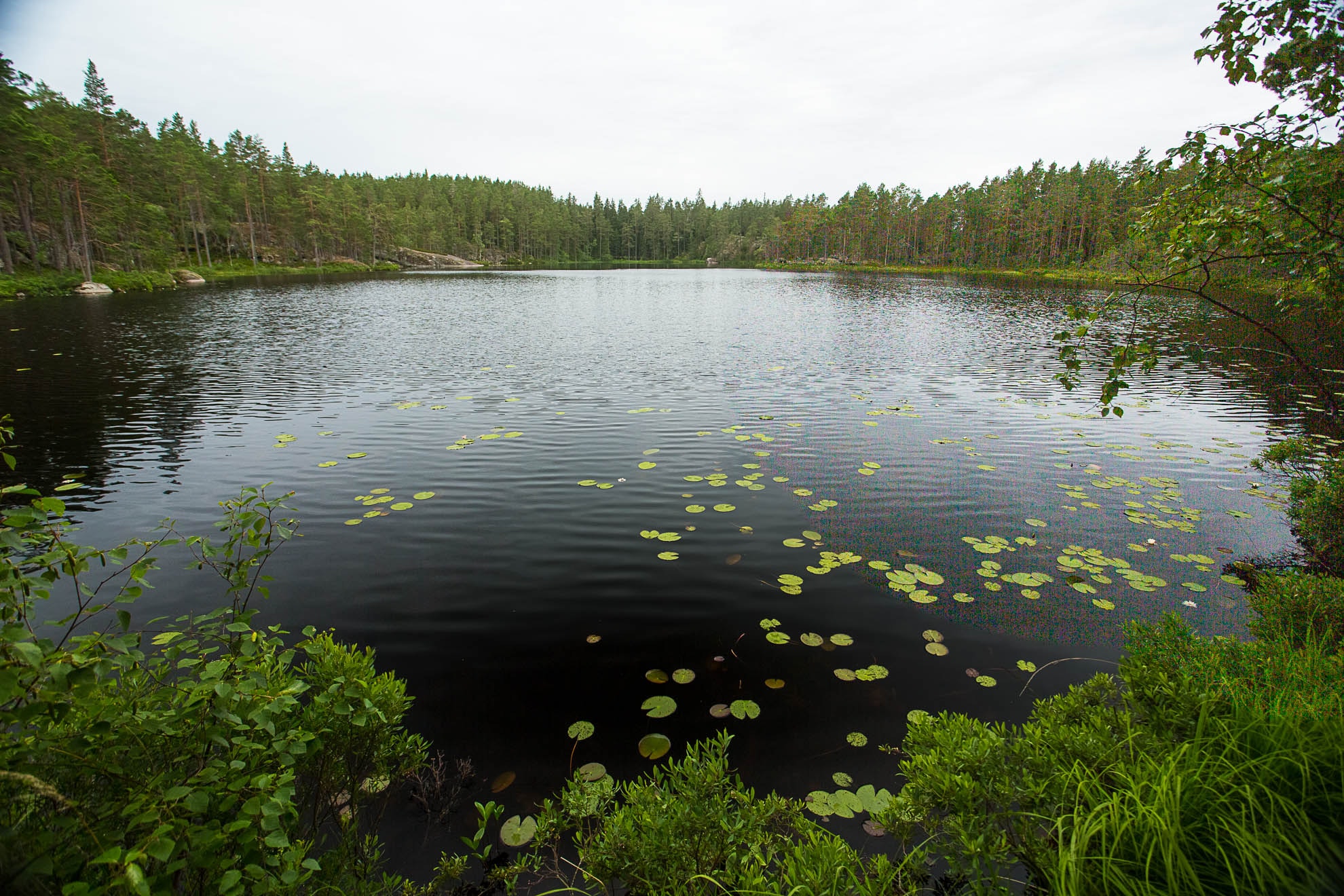 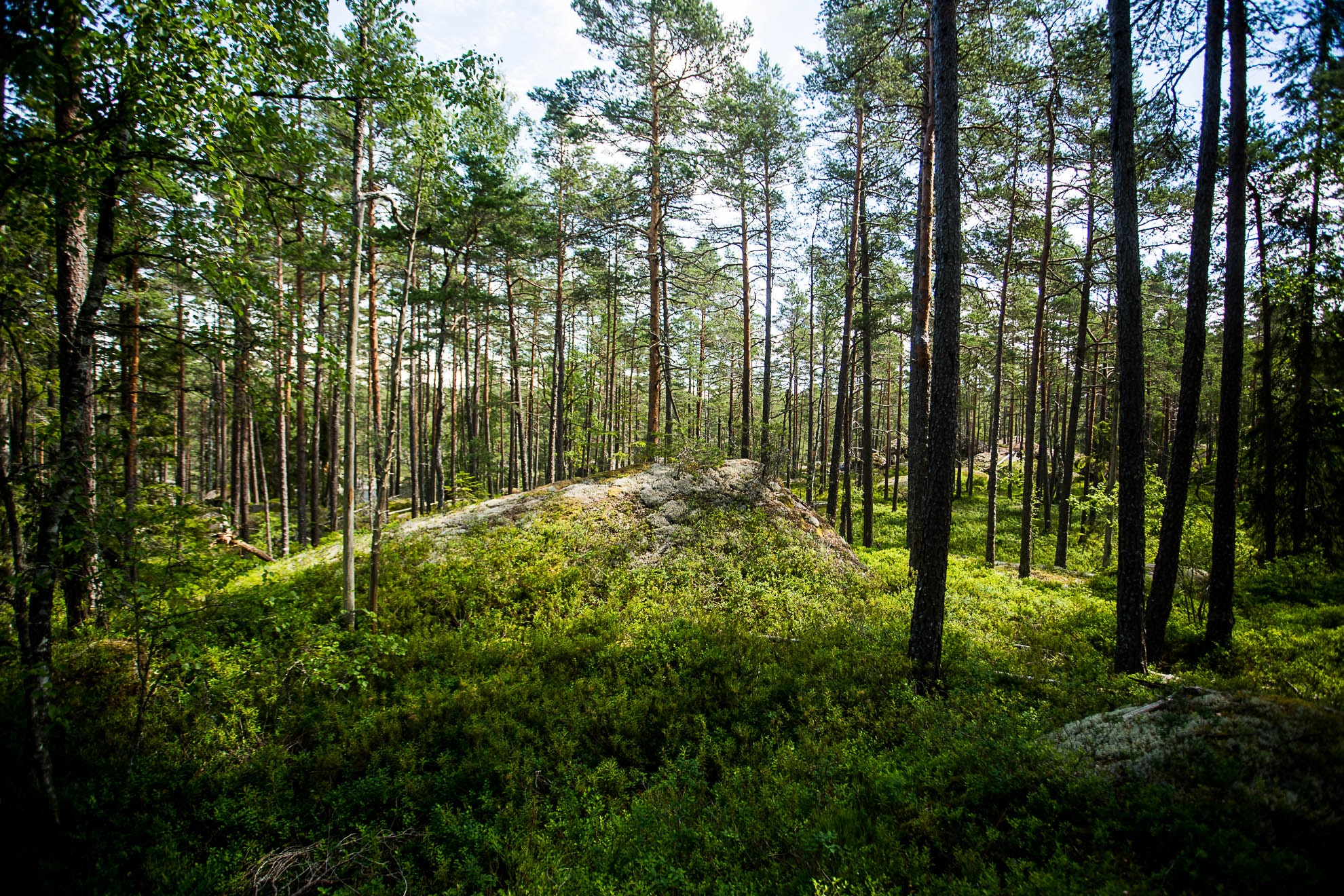 A popular and well maintained national park, about three hours north east of Gothenburg, Tiveden offers, hiking, camping and water-sport opportunities that are well worth exploring.

The trail is a loop near to the Vitsands entrance, and comes off trail 4 (which circles the lake).

Tärnekullerundan was perhaps the best trail in the park that we hiked, despite only being 1.3 kilometres long. It cuts through some beautify terrain, and its highlight is Vitsandsgrottorna, the white sand caves. About half way around the park, the caves at first appears to just be a collection of boulders with a small shelter you can get into, but you then realise to continue with the trail, you have to climb up a rock pile, and through a rock archway, which then presents you with great views over the north entrance to the park.

The trail then curls back around through a small crevice and woodland before coming back to the main trail and where you started.

In terms of terrain and hiking, in such a small trail there is a lot for your time.

The grotto is made of boulders brought to the area in the last ice age, approximately 10,000 years ago, and gives you a chance to climb up then and through to the next portion of the trail.

Squire Hunter’s trail is fairly short, twice the length of Tärnekullerundan, and does not have the same variety or terrain to make it as interesting, but it does have two particular things to make it worth white. Firstly it is a good bridge onto trail 9, rather than using the purple trail and secondly there is the famous Boulder.

Near the northern most point of the trail is Junker Jägeres Boulder a massive ice age boulder, that stands alone and proud in the forest. The story goes that Squire Hunter lost his beloved maiden at this boulder, though older residents of the area remark this supposedly historic story seems to have its roots in Tiveden’s rise as a tourist destination rather than in any local myths. Regardless, it is a sight worth seeing, standing tall and proud in the forest.

Connecting to both the purple (4) and white trails (7), Sigmansrundan is a medium length trail through primarily undergrowth and old growth forest. Its fairly easy and you can move quickly through it. There is a mix of lichen and dry areas along with fairly humid forests. We found a likely looking large rock, climbed up and had lunch there watching people walk past below us.

Approximately half way along the trail, is Stigmansrundan, or Bandit’s Pass. A cleft through the rocks. From the literature I was expecting something similar to the Crevice in the Höga Kusten trail, but in truth its is a pass so large they’ve build the main road through the forest along it cutting through the park and offering cars easy access to the main entrance.

One of the longer trails in the park, and it winds between rift valleys and faults that were formed a thousand million years ago. Much of the hike is through mossey wet spruce forests, but at one point you reach Tjádersogen. As you walk the trail, which goes up and down hill quite frequently, you’ll also pass by a number of lakes, mostly with a brown colouring for the lack of nutrients and leached iron from the rocks. To one side, if you are paying attention you’ll see a former tar making ditch with a small signpost drawing attention to it…

Also known as the Forest of capercaillie, as this pine section of the trail is the preferred home to the forests largest gallinaceous bird, the capercaillie.

Near where the trail meets Trail 1, is the Outdoor Church, where in the eighteenth century, to avoid the ban on church meetings not organised by the church the faithful met in the woods for their ceremonies. There is not much to see, but it is an important place none the less.

The longest single trail in the park, the purple Trehörningsrundan, circumnavigates the lake. Entering from Vitsands it would be easy to assume it is an easy and often walkwayed hike, but it is actually one of the most challenging to complete. Whist near to the entrances it is quite accessible, in other areas, you will be scrambling up rocks, hiking up and down steep inclines, and taking in some of the best views in the park. All of the other trails intersect with Trail 4, and so you’ll likely be completing parts of it regardless of other plans.

A short walk from the Vitsands entrance, is Käringaudden, one of the two places you are allowed to camp in Tiveden’s national park. Expect to be sharing the campsite with others, but there is a good amount of space to use, though much of it is on a slight incline, so it is best to pay attention to how you align your tent. There is wood, and tools for cutting provided firewood, a good sized fire pit with benches and a drop toilet (though its only a ten minute walk back to the vitsands entrance which has nicer toilet options. The campsite is on the main trail and easily found, and fronts onto the lake giving nice views in the evening and mornings, though of course this does bring with it additional mosquitoes.

Approximately a twenty minute walk from the Ösjönäs entrance is Mellannäsudden campsite, you have to hike a short trail through knee high undergrowth before reaching it, and it is the mirror image of Käringaudden, being on the south of the lake. Again there is a drop toilet, fire pit with benches and wood supply. There seems to be more camping space here than at Käringaudden, but it also had more visitors, perhaps because it is more secluded.

A short walk off of the trail, and easily accessible via car is the Giant’s Kettle, a large rock formation with a kettle shaped bowl, large enough for a giant to cook in. There is not much else here, and so it is worth a visit if you are passing by, but better to make the effort to see Junker Jäger’s stone

Perhaps the most challenging trail in the forest for its size, at just under five kilometers long you wil be climbing two challenging hills. Stora and Lila Trollkyrka. The trail shares a long section with trail 5 (Blue) and gives you the chance to see the two famous hills as well as a few other sights.

On the bank of a river is Metesjon, a well equipped rest area with drop toilets, recycling bins, a fire pit, benches and a rain shelter. It is also accessible by road. It would be easy to mistake this spot as a campsite given the facilities. It is only an easy kilometre hike from the main entrance, making it s a somewhat strange location to stop.

Stora Trollkyrka is a upwards climb along the trail, you’ll be clambering up rocks and finding handholds where you can. Strangely when you reach the top, there is a well built staircase to take you to a viewing platform. Unfortunately the trees in the local area have all grown so tall you actually don’t get much of a view over the surrounding country side.

Harder to find than Stora Trollkyrka, Lilla Trollkyrka gives a great view over the imaginatively named Lake Vättern. Used by early sailors as identification points, no one is sure why lilla and stora Trollkyrka as so named.

Just before the end of the trail, Oxaberget offers a rocky outcropping giving a view over the main entrace and the lake. Worth pausing here for a breath and to appreciate the view.

Fagetärn Lake is famous for its vivid red water-lilies, which bloom in the summer months. The story goes a farmer killed his daughter in sacrifice for good crops and her hearts blood stains the lilies to this day.

When we were there, there were no red lilies, just the normal yellow and white ones which was a disappointment, but does not detract from this beautiful spot. A good path runs around the edge of the lake allowing for access even with some mobility challenges.

A small cafe on the lakeside, offering tea and coffee as well as local tourist information. The cafe also does periodic barbecues, bringing in a good local crowd.

A cafe in the middle of a small village, with limited signage on the way, the cafe is set in a charming house converted to an open plan cafe with a large outdoor space. The Cafe offers a range of specialty teas and coffees to buy on premises or in packets to take away as well as a great selection of home baked cakes.

The staff and friendly and often exchange students working in the cafe in their summer break. Its a lovely spot for a bit of a break from hiking and camping and well worth the trip.