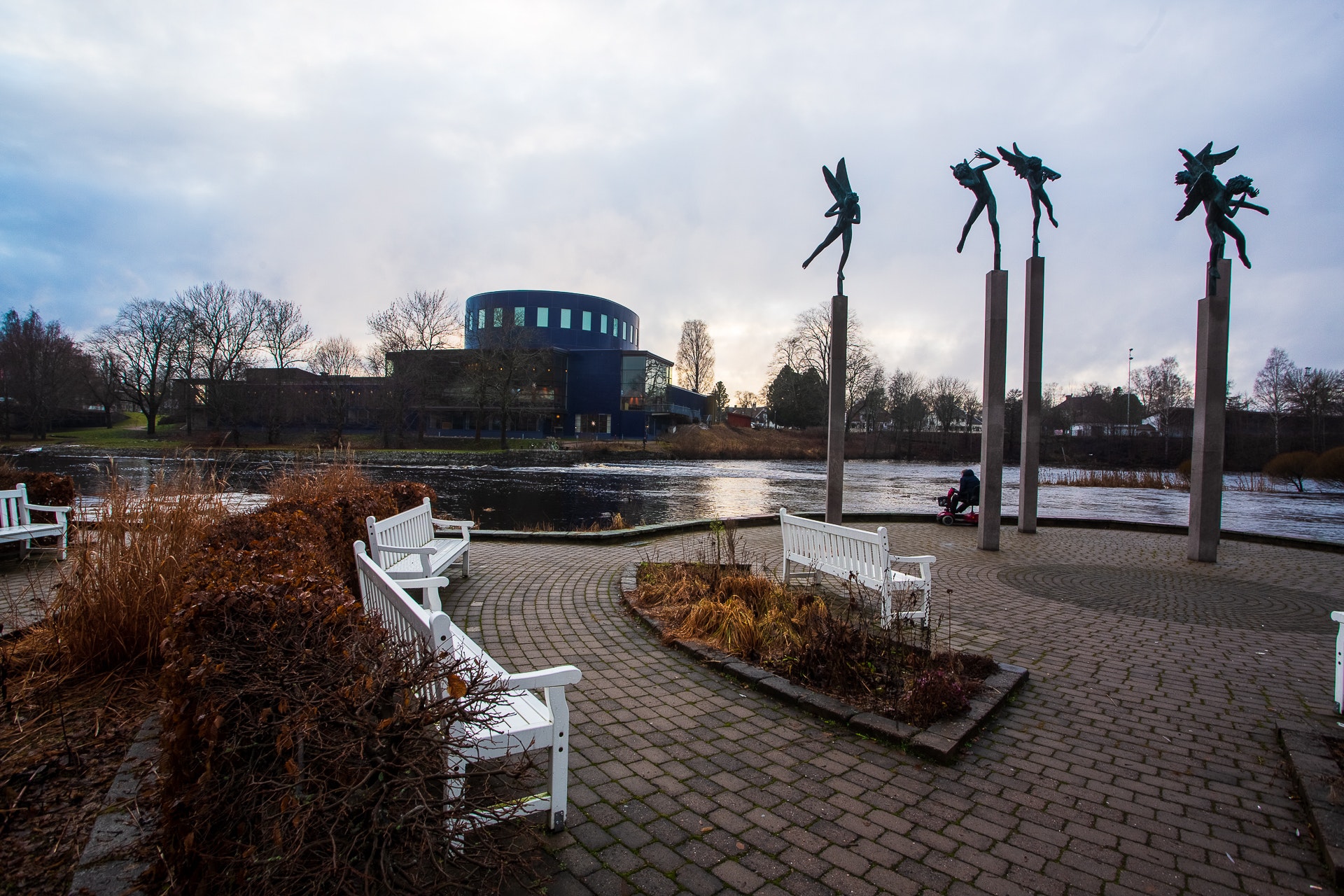 Sitting between Uppsala and Umea, Gävle is an old port city. It is the oldest city in historical Norrland, receiving its charter in 1446 from Christopher of Bavaria. With approximately 100,000 residents its one of Sweden's larger cities and is primary known for Gävlebocken, the Gävle Christmas Goat. Sitting between Uppsala and Umea, Gävle is an old port city. It is the oldest city in historical Norrland, receiving its charter in 1446 from Christopher of Bavaria. With approximately 100,000 residents its one of Sweden's larger cities and is primary known for Gävlebocken, the Gävle Christmas Goat.

In 1986 as a result of the Chernobyl disaster, Gävle was subjected to a severe deposition of radionuclides and Gävle became one of the most affected areas outside of the Soviet Union.

Gävle is a fairly condensed town, cut through the centre with a river to the coast, which further inland runs through some nice park areas. Surprising many, Cat Stevens lived in Gävle with his mother for six months in his youth.

Old Gävle is a small set of streets, the main one running from Slottstorget to the County Museum, with a few side streets leading away. Not on par with the historically recreated streets of Eskilstuna.

The largest straw goat in the world, and created fresh every year, it is smaller than you expect. The goat is built by the Southern Merchants, though since 1986 a second smaller goat is built by the Natural Science Club and called the Yule Goat. Arson of the goat is illegal and carries a penalty of three months imprisonment. This harsh sentence is due to the fact that it has been destroyed 37 times in the past 53 years. For a couple of decades the Southern Merchants stopped building their goat due to its repeated arson and that was the cause of the NSC's Yule Goat. Despite normally being the smaller of the two, it is actually the Yule Goat which holds the Guiness World Record. (12.5m in 1985 and 14.5m in 1996). The rivalry is such that the "Natural Science Club put up a sign near their goat wishing a Merry Christmas to everyone, except the Southern Merchants."

The protection of the goat over the years has increased dramatically and now features a double fence, 24-hour CCTV. Two guards patrol around the goat frequently, 24-hours a day, along with a K9 unit. These precautions of floodlights and fences do reduce the ability of tourists to actually take photographs of the Goat. The Yule Goat, standing nearby is much less protected, and on 13 December fire crews responded to a call that the 'little goat' was burning, only to discover it was in fact a miniature goat somebody had brought and torched at the scene

Famous in Europe and particularly the US due to the volume of Swedish immigration from Gävle over the years, Gevalias Coffee is produced in Gävle and the factory is a distinctive building in the city near to the water.

Set in walled grounds, the Gävle manor house is a large well kept building, still in use as civic offices. Several of the outbuildings are used as well, and in one corner half of the Prison Museum can be found.

Sat on the Gavleån, near to the Art Museum, the Concert Hall designed by architect Bo Karsberg was built on the foundation of the bathhouse Strömbade. Despite its somewhat Art Deco look, the concert hall was built in 1996. There are 169,000 blue tiles used inside the concert hall.

The concert hall is home to one of Sweden's seven Symphony Orchestras.

Originally, Stortorget referred to the square outside of the Rådhus, which is now an open space and central bus stop. It is now the central square in the north west section of Gävle, surrounded by shops, the mail shopping mall and dotted with carved stone pillars. During the working day, a number of market stalls can be found here.

Perhaps the largest museum in Gävle, set in an building created to be a mirror of the von Plessenska Palace in Copenhagen as per the wishes of the donor.

The top floor hosts an excellent set of modern art by local artists. There is a striking response by one artist to the FA's desire for women's soccer uniforms to be 'tighter and more feminine' as well as numerous sculptures scattered around the floor. It was deserted when I was there just after opening.

The second floor also houses art, as well as blown glass by Gunnar Cyrén. A few rooms are set out with period furniture and a small room shows the "Vi Liver" photographs of local musicians. Classic art works. Additionally there is a small but impressive textile exhibition of local weaving.

The first floor has historic pieces of art as well as a section on local pre-history, including a small Viking boat. It is a well laid out room but with limited items in the collection, some swords and axes, a skull. Its good, but with Gamle Uppsala a short train ride away there are better alternatives for artefacts. Finally there is a section of the museum dedicated to ships, unsurprising given it is an old port, the room has the smell of sawn lumber.

The ground floor has the cafe and shop as well as a large Gingerbread House version of the Museum, there for Christmas.

The Swedish Prison Museum seeks to give visitors insights into how criminals have been treated in Sweden over the past 300 years. It is spread over two buildings. The first is in the grounds of the Gävle Slott.

Two buildings. 1700 building. Not a jail. Good audio. Reminds old punishment exists in some places today. Spanish violin, other models of what was done.. Low ceilings. Faces in the walls like carbonate. Clever painting to show shadows that sent there. Some staged rooms with lifesize models. Weirdly upbeat Xmas . Prison nicknamed hotel Hamilton. 10 cells 3 installed at different years of use others used as exhibit rooms. Cell one. Pregnant and unmarried. Imprisoned. Masks had to be worn in the 1 hour of yard time to break down their criminal personalities. Actual result dysfunction. To change the sense a jailor was low status they were given uniforms and rank like the military. Swedish living also seen in prisons. Every cm is used. Coloured walls common. Escape attempts room. Reach escape. Drugs and a noose. Dark. Small art gallery of prison artists. Pre 1921 last execution. Anders Gustav Salman last executioner. Birch tree marks the final execution place of Per Johan.

Not a long walk away from the Concert hall, the Gävle Art Center is a small building shared use with a community centre feel to it. The exhibition on show was a series of mixed media installations by Gunilla Samberg called Som Kropp, primarily focused on fabric and yarn. Its a well laid out space and warmly and lit, something important with the Nordic darkness.

One of the more striking elements is an old fashioned child's pram, filled with soil and tall shoots of grass. Its a strong statement of life.

Facing the Concert Hall, a more 'formal' park called Stadsträgården can be found.In the paved section you can see several of "Milles angels". From Sculpture and Architect Carl Milles. In this case the "Five musicians of genius". Otherwise these sculptures can be experienced in his home turned park in Stockholm called "Millesgården" https://togstrek.com/blog/millesgarden

One of Sweden’s biggest city parks, Boulognerskogen is a lovely space for a walk, even in the cold winter weather. A scattering branches of the main river give the whole area a somewhat surreal feeling of being on small islands. From time to time, you'll find a sculpture in the open space.

Just to the north of Boulognerskogen, sits the old graveyard a well kept space of quiet contemplation.

A fantastic restaurant, and one which made me regret being a temporary vegetarian as the moose meat options looked amazing. Sat facing Gävlebocken, the staff are professional and helpful, the service is fast and the food is excellent. The wine-list is extensive.

A nice Italian just off Stortorget, with a strong chain vibe to it, mostly due to its location connected to the . The manager is authentically Italian and the food is good and served quickly.

A decent Thai restaurant amongst the shops, its very popular with the locals, and offers a vegetarian option for more or less every dish.

Set in Fyshuset, an old fashioned, huge gym space, the climbing section is a couple of bouldering walls, with shoes you can rent on the honour system. the setup is good, with some reachy problems and a real focus on maintaining your footwork.